“I define myself as a single mother. That’s how I see myself,” says Laura Lawrence. “I felt like the University of Wisconsin-Whitewater was a very safe place for me to be a single mother, and they had the flexibility that I was looking for to be able to complete my program.” Lawrence’s desire to see future generations of single moms graduate from UW-Whitewater — and her gratitude for her own positive experiences there — inspired her to create the Lawrence Scholarship for Single Mothers.

“I definitely had support from my family, but raising [my daughter] Reagan by myself, I was juggling more things than the average student,” Lawrence says. She recalls having transparent conversations with her professors about her situation and need for flexibility and receiving total support in return. “I think they appreciated that I could have just made a decision not to get an education, and maybe that would have been easier,” she says. “But I was doing everything I could to make sure that I could make it to class.” 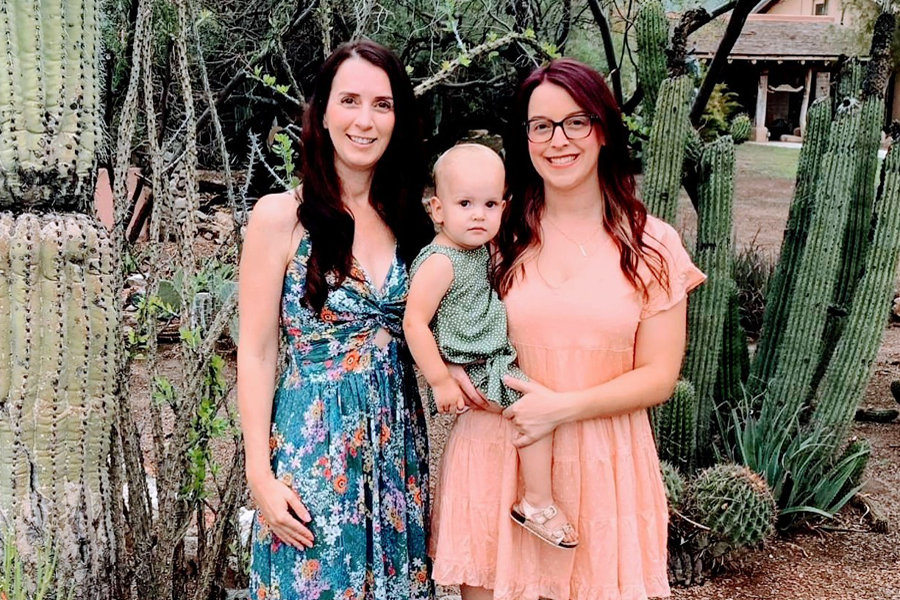 Occasionally “everything” included an in-class cameo from Reagan, which charmed her fellow students — and gave them some perspective. “I think everybody responded really well to the fact that, hey, here’s a different situation than my own,” Lawrence says. “I was doing this, and as difficult as school was for them without a child, [they saw] how much more difficult it is when you do have a child. It speaks to a very different experience than the typical college student.”

Something Lawrence and her fellow students had in common, however, was the opportunity to form meaningful relationships with their professors. For Lawrence, her biggest influence was Dr. Choton Basu from the IT Supply Chain Management department, who broadened her worldview and, in turn, altered her career trajectory. “He really introduced me to the possibility of looking at the world in a more global way,” she says. “And now in my career, having that global experience is the number-one criteria for me when I’m looking at where I want to go with my job.”

Lawrence has always known she wanted to work in advertising and marketing; it was her goal from the age of twelve. After kicking off her career with a B.A. in journalism with an emphasis on advertising in 2002 and exploring the field for a few years, Lawrence was ready to earn another degree. She chose to earn her MBA in marketing at UW-Whitewater because “it felt like home,” she says. “It also offered a great MBA program that had the flexibility that I needed for my career.”

The university’s flexibility was crucial for Lawrence once again, as it gave her the ability to attend classes remotely from Szerencs, Hungary, where she’d moved with Reagan to teach English for a year.

Lawrence’s world continues to grow. In addition to starting a new role as the Vice President of Marketing for ClearVoice, she’s also pursuing a second master’s degree, this time in international relations, which she’s earning remotely through Harvard University.

Lawrence’s new role has taken her to Arizona to reside, while Reagan is back in Wisconsin attending school to receive her bachelor’s degree in human resources.  In addition to attending school, Reagan is working full-time and is a full-time single mother to her two-year-old daughter, Hadleigh.

“I look back at my journey, through having Reagan, going to school, working multiple jobs, and I was very fortunate that I had a great support system,” Lawrence says. “When people ask me how I did it, I feel lucky that I can say it wasn’t as hard as it could have been. I realize there are people who are just not in the same situation.”

Laura and Reagan reviewed the application essays for the Lawrence Scholarship for Single Mothers together and selected the first-ever recipients in 2019. Every year, the fund will award $2,500 each to two full-time undergraduate students to support their academic success.

“Financial burdens are extraordinary,” Lawrence says. “They can be the reason why people stop programs. If this helps somebody not quit their program, I would love to be a part of that.”

For more information on creating a scholarship and other ways to support UW-Whitewater students, please contact foundation@uww.edu.