This survey collects information about the experiences of undergraduate students in their first year and senior year from over 600 institutions across the US and Canada. Respondents are asked to share their perceptions about UW-Whitewater related to their academic activities as well as their interactions with faculty. The findings from this survey will be used at UW-W to understand and improve the undergraduate experience.

Participation in this survey is completely voluntary. All responses to the survey will be kept confidential and the data collected will be reported in the aggregate. For specific information how participants will be treated, what they can expect should they choose to participate and their rights to withdraw from the survey, please read the NSSE Consent Agreement.

The 2020 NSSE Survey  was administered between February 6, 2020 and May 15, 2020. Undergraduate students who are either in their first-year at UW-W or have achieved senior standing by the beginning of the Fall 2019 semester were invited to participate.

UW-W participates in the NSSE survey on a three-year cycle. The last time that the NSSE was administered at UW-W was Spring 2020. UW-W is participating in the NSSE this spring as part of a UW System consortium. As a result, the survey will contain a few additional questions especially designed for students in the UW system.

NSSE is being conducted by UW-W and the Center for Postsecondary Research (CPR) at Indiana University at Bloomington. The CPR is a national organization that has conducted the NSSE survey since 2000. CPR reports the results of the survey in its own publications, as well as in other venues, such as the Chronicle of Higher Education.

If you have any questions about UW-W’s participation in this survey, please contact Institutional Research and Planning at 262-472-5671 or irp@uww.edu.

Engagement Indicators (EIs) provide a useful summary of the detailed information contained in the NSSE responses. By combining responses to related NSSE questions, each EI offers valuable information about a distinct aspect of student engagement. Ten indicators, based on three to eight survey questions each, are organized into four broad themes: Academic Challenge, Learning with Peers, Experiences with Faculty, and Campus Environment.
2020 | 2017 | 2016 | 2014 | 2013

The High-Impact Practices report provides information on six HIPs that students are surveyed about. Three are relevant for first-year students and all six are relevant for seniors. Overall HIP participation and response frequencies are included in this report.
2020 | 2017 | 2016 | 2014 | 2013

Multi-Year Reports are available to institutions participating in multiple NSSE administrations since 2013, the year of the last survey update. The report presents year-to-year results for Engagement Indicators, High-Impact Practices (HIPs), and key academic challenge items to illustrate patterns of change of stability.
2020 | 2017 | 2016 | 2011 | 2010 | 2008

Starting in 2013, NSSE allows participating institutions to add up to two topical modules -- short sets of questions on designated topics such as academic advising, civic engagement, diversity on campus, technology, and/or writing.

In addition to topical module questions, UW-Whitewater is a member of the UW comprehensives consortium that submits a short list of additional questions to be included in the NSSE survey every third year.

Academic Challenge
Challenging intellectual and creative work is central to student learning and collegiate quality. Colleges and universities promote student learning by challenging and supporting them to engage in various forms of deep learning. Four Engagement Indicators are part of this theme: Higher-Order Learning, Reflective & Integrative Learning, Learning Strategies, and Quantitative Reasoning. These bar charts represent the responses submitted by seniors in 2020.

Learning with Peers
Collaborating with others in mastering difficult material and developing interpersonal and social competence prepare students to deal with complex, unscripted problems they will encounter during and after college. Two Engagement Indicators make up this theme: Collaborative Learning and Discussions with Diverse Others. These bar charts represent the responses submitted by seniors in 2020. 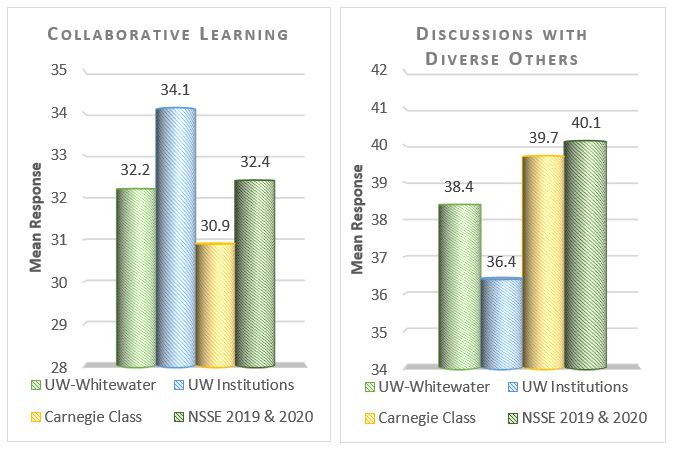 Experiences with Faculty
Students learn firsthand how experts think about and solve problems by interacting with faculty members inside and outside of instructional settings. As a result, faculty become role models, mentors, and guides for lifelong learning. In addition, effective teaching requires that faculty deliver course material and provide feedback in student-centered ways. Two Engagement Indicators investigate this theme: Student-Faculty Interaction and Effective Teaching Practices. These bar charts represent the responses submitted by seniors in 2020. 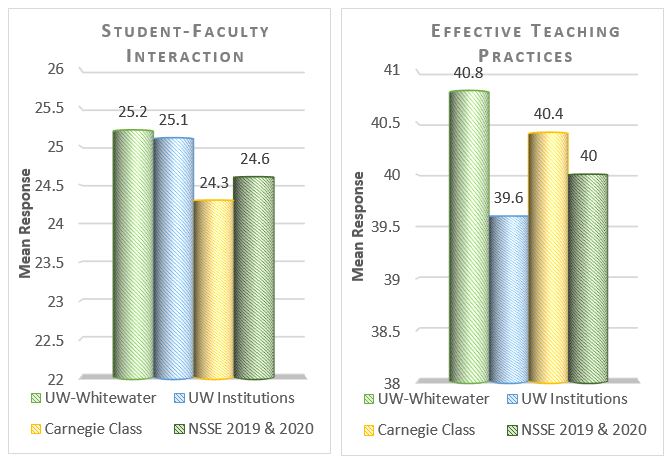 Campus Environment
Students benefit and are more satisfied in supportive settings that cultivate positive relationships among students, faculty, and staff. Two Engagement Indicators investigate this theme: Quality of Interactions and Supportive Environment. These bar charts represent the responses submitted by seniors in 2020. 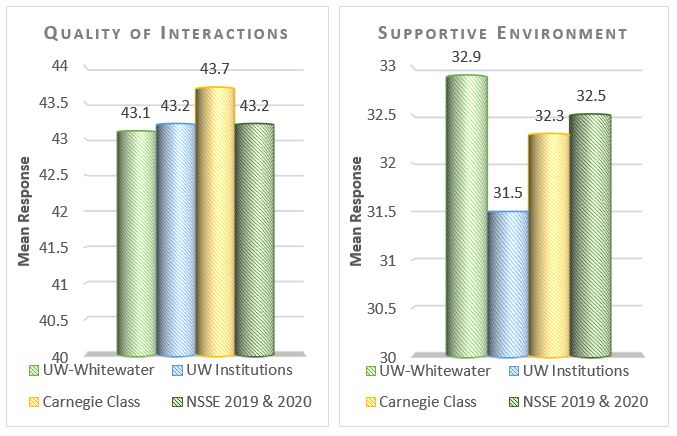