Pastels by Judy Grochowski, UW-Whitewater Alumna of the Art Department and signature member of the Wisconsin Pastel Artists

My work is in two categories-either plein air-done outdoors with an effort to capture the scene before light and shadows change or from a challenging photograph. Since I’m not standing with you to talk about my work and ideas, I’d like to provide the backstory and allow you to add whatever you see in the work. I’m Irish and telling a story appeals to me!

If you are interested in any commissioned work, please email me at uudyja@gmail.com 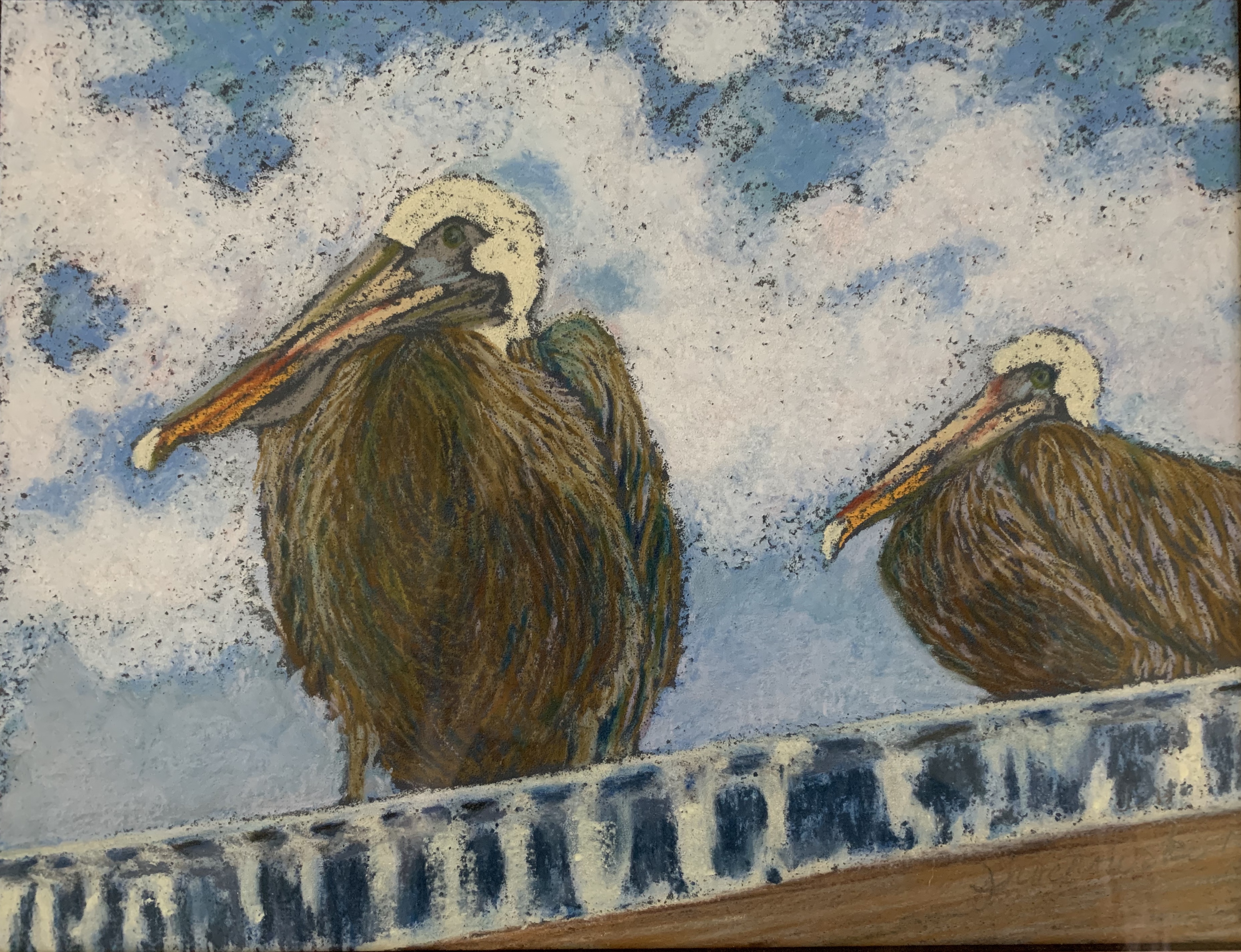 Breakfast Buddies was named by my brother John. He took my husband to a pier (near their snow-bird home) in Florida to watch early morning fishing. As a catch was landed, one could hear the tapping of webbed feet on the metal roof overhead and then the pelicans would appear, looking down, waiting for breakfast castoffs.

Linear Whitnall is the recall of a very crisp day; a fresh-fallen snowy walk through an area of Whitnall Park, silent and peaceful, with that bright blue clear sky we often see in winter. 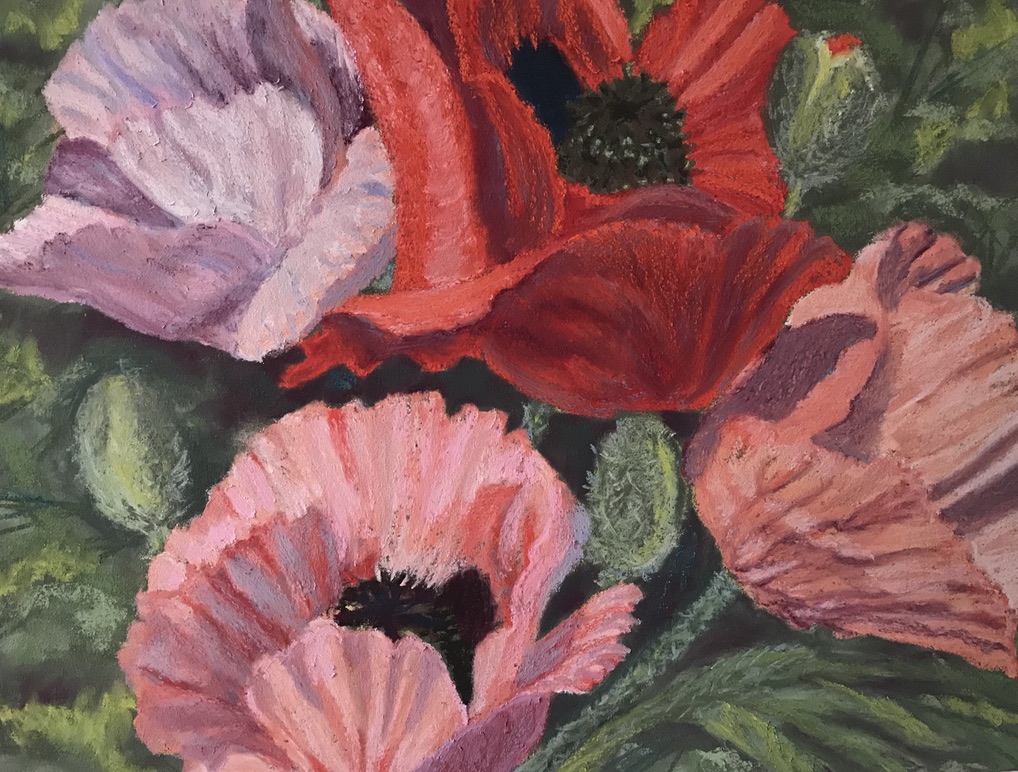 Poppy Sway is another challenge-can I capture the “feel” of these beautiful papery and ephemeral flowers? 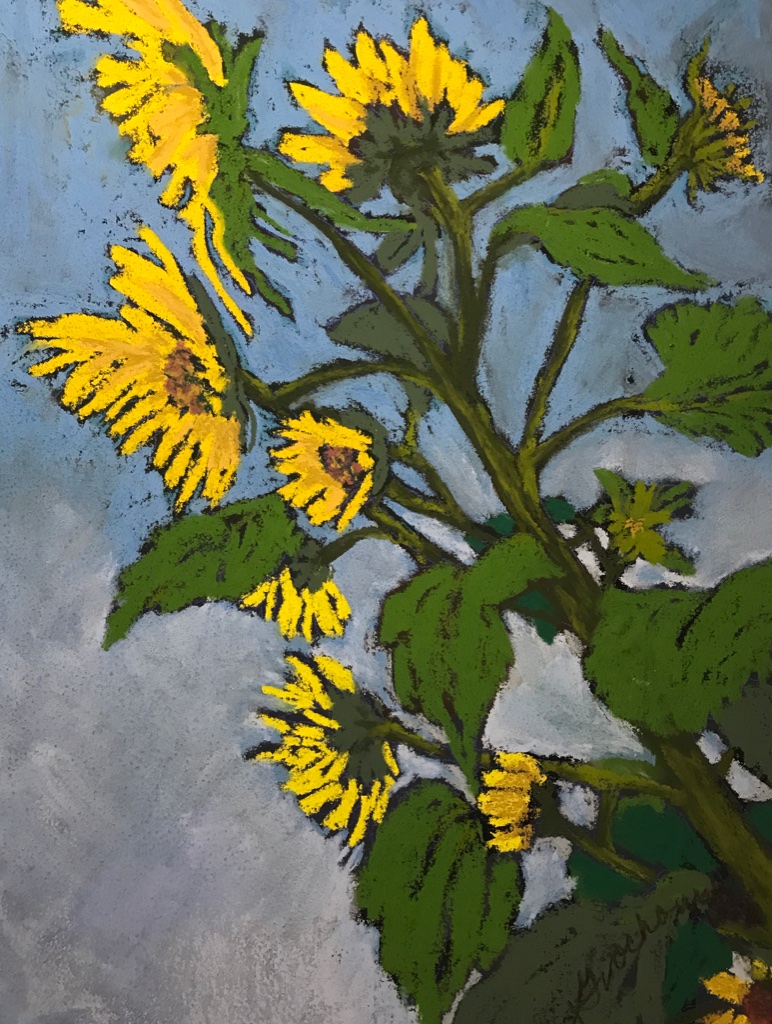 Sunflower Stretch was seen and photographed near a barn in Door County. Sunflowers have such an amazing relationship with the Sun and these were doing their thing-stretching towards the light. 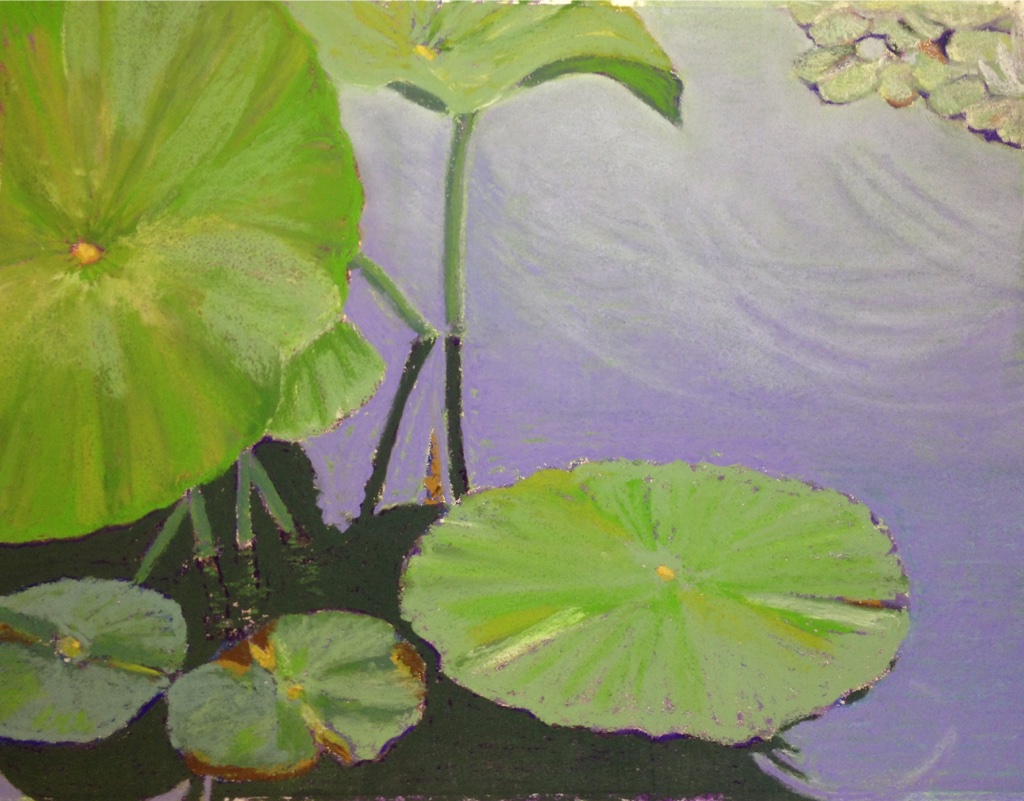 Silent Serenity is my entering the space of so many artists ahead of me who have painted lily pads and watery surfaces. I began with underpainting the complementary color for each area, and allowing it to peek out when applying the final color. As a closeup, I feel serenity conveyed if I can just stop and take a moment gazing at this scene. 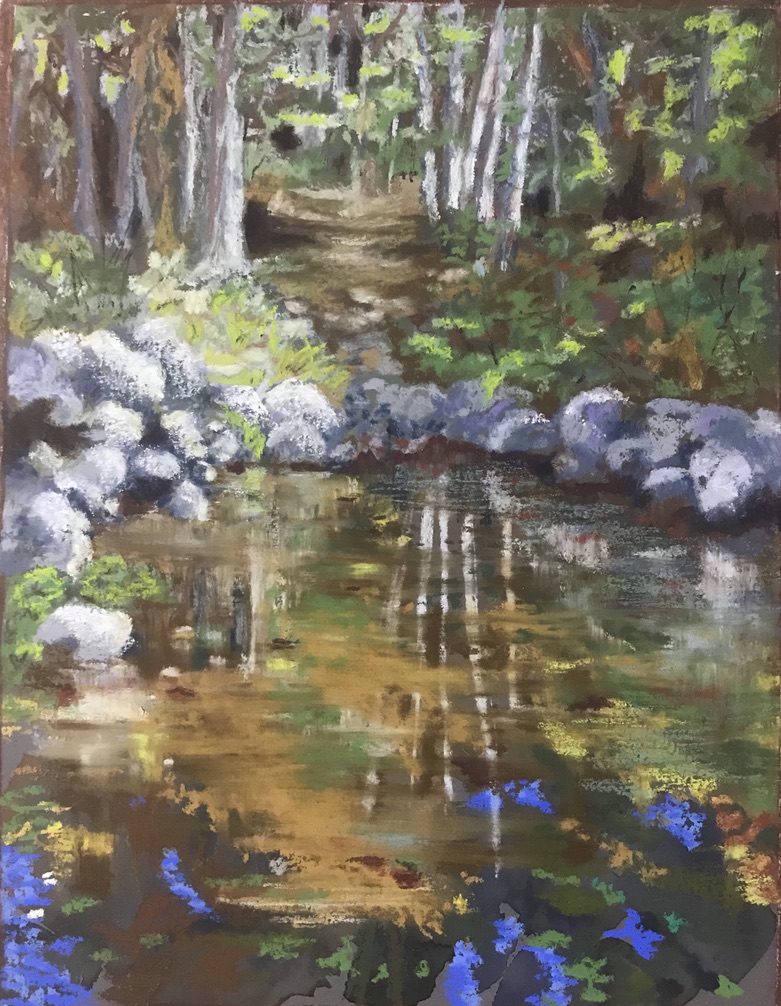 Springtime Mirror is an exercise in reflection and observing the elements in this environment, from a photo taken at a park. I can’t even tell you which park, because the photo is older and I don’t recall. However, how lucky are we that it could be one of any of so many parks? 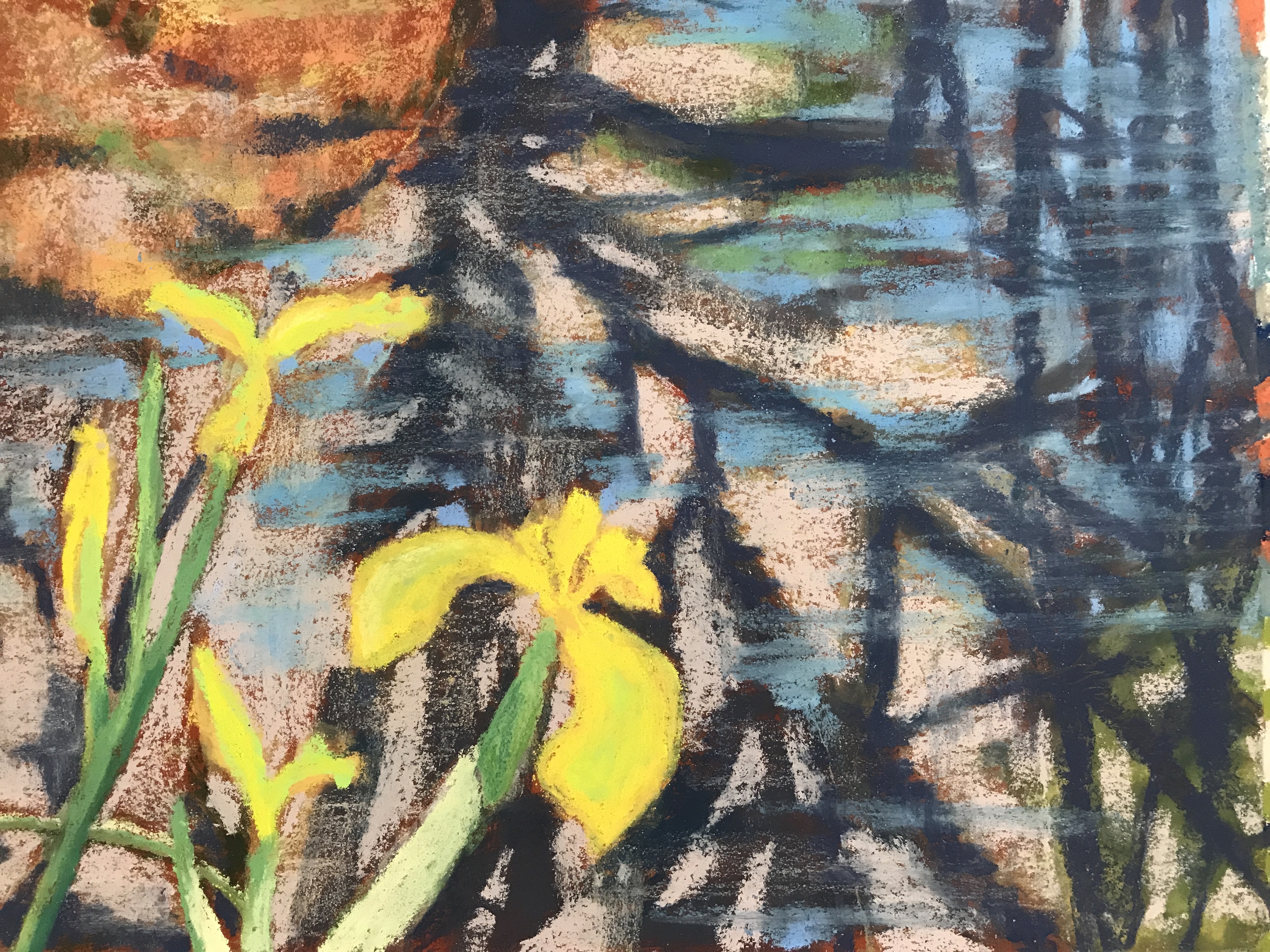 Ditch Iris was spotted and photographed on a beautiful April day, not far from Botany Bay Rd. I was so struck by this wild flower, popping out of a watery ditch in a marshy environment. The area had sustained a bit of hurricane damage; though the natural world was flourishing. The surrounding water has an reflective abstract treatment to allow the viewer gaze to travel between it and the wild flowers. 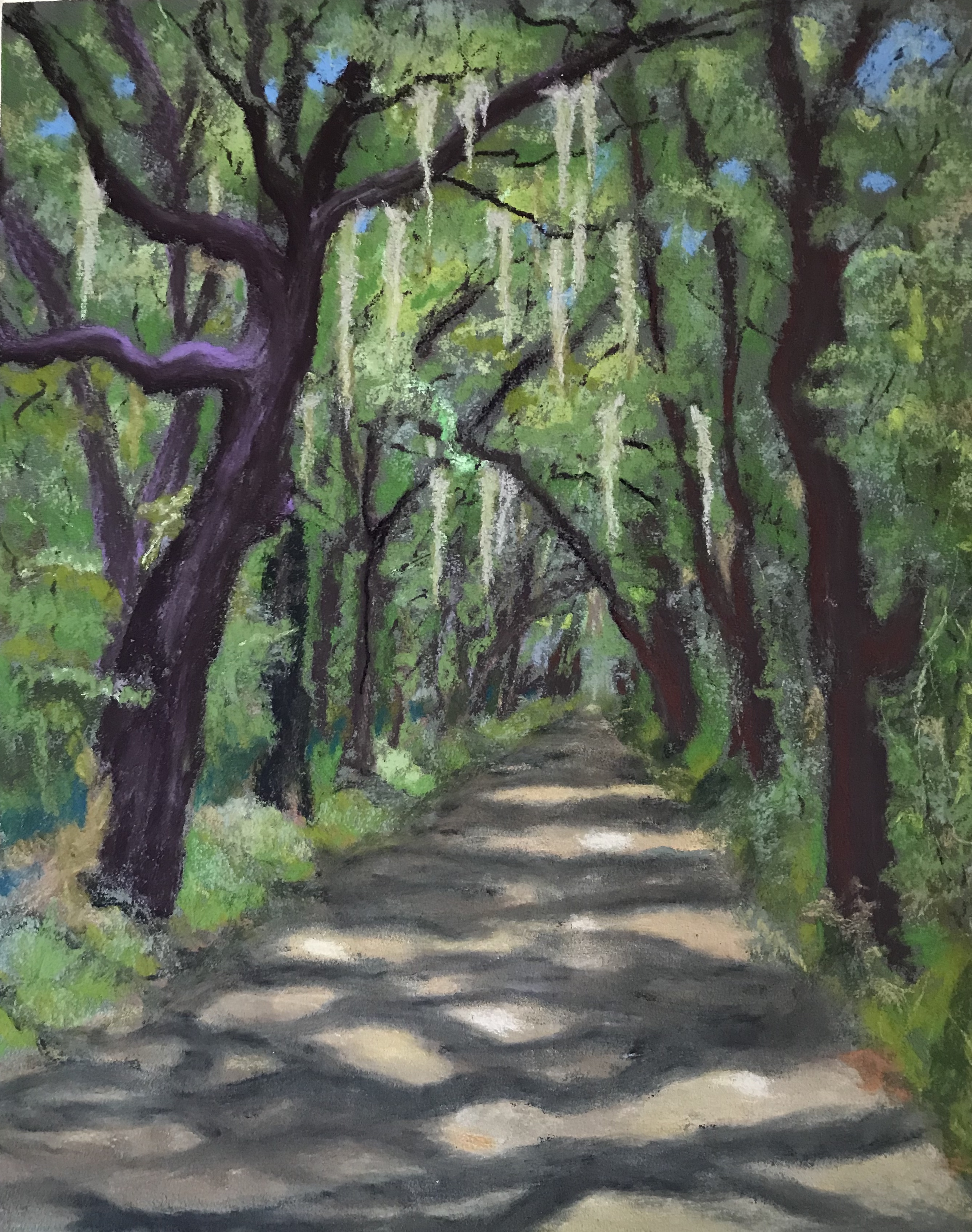 I stopped on Botany Bay Road to capture Moss & Shadows, such a common view in the south. It was a quiet, warm day, and this road leads to a special place called Boneyard Beach. I’m always intrigued by Spanish moss when I see it-perhaps because it’s novel to those of us who don’t see it all the time-and the Live Oaks, as well. It’s a somewhat mystical feeling for me.

Foreboding Skies was a quick plein air done from the patio area of one of the Visitors Centers at Horicon March. This was on a rise so I looked down over the landscape. While somewhat shielded from sun, which dissipated quickly and the wind which picked up quickly, I watched the storm approach. About the time I’d packed up my gear, it started to rain heavily. 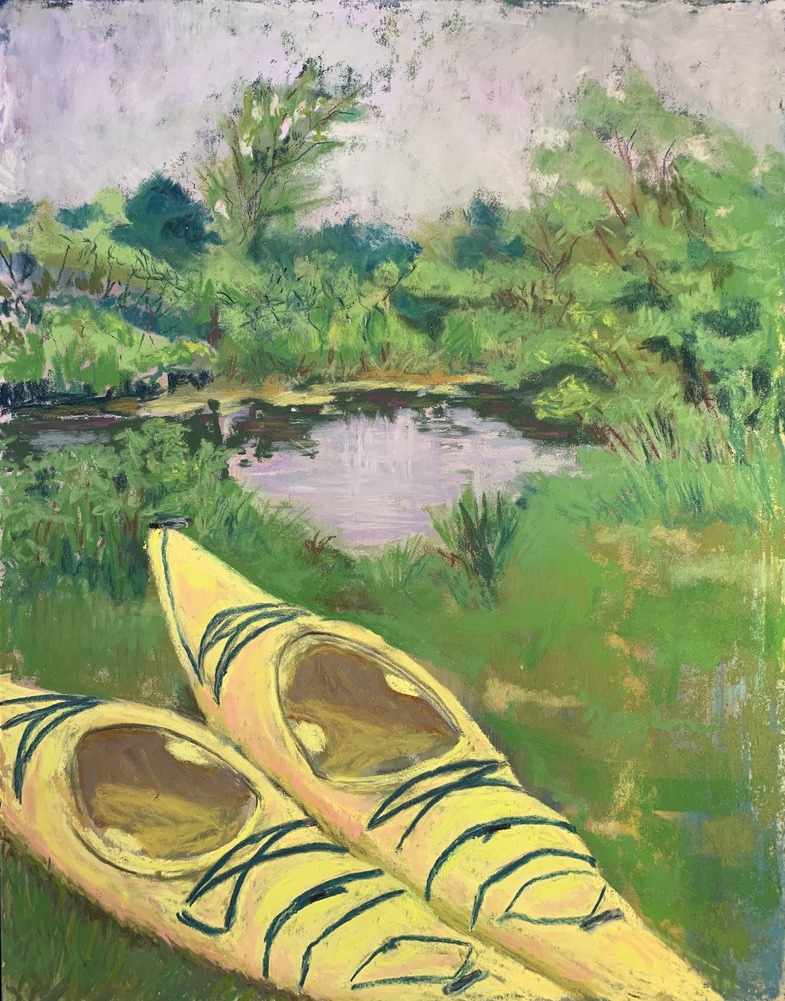 Overdue Paddle was painted in Lake Mills, at a spot where kayaks put in. I looked at the kayaks and thought to myself that it a paddle was overdue for me. I watched people show up and nab those, put them in the water and shove off. Summer fun!

Winter Prelude was painted in the in between of Fall and Winter. The location was on High Road, in the Horicon. We’d had a first snowfall, and most of it melted, but there was snow which clung, due to lack of sun and warmth. It caught my eye. 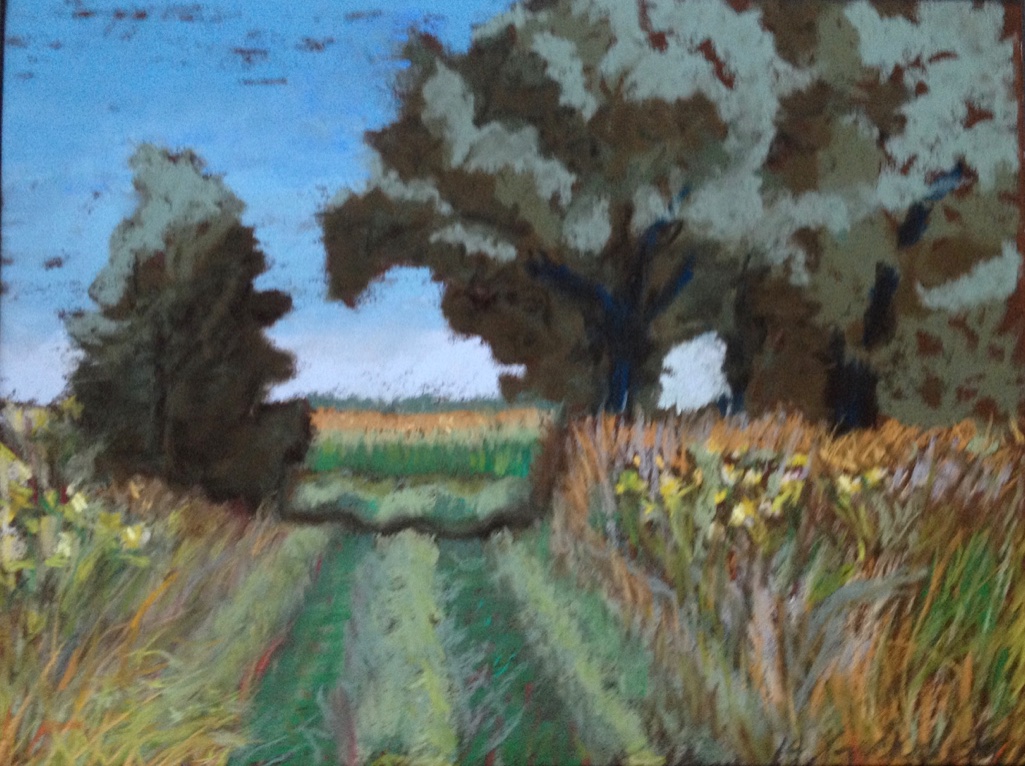 Shadow Path, in the Horicon is another scene which could be anywhere. The sun was bright, birds were chirping, warmth on my shoulders; it’s a favorite of mine because it’s my first plein air! 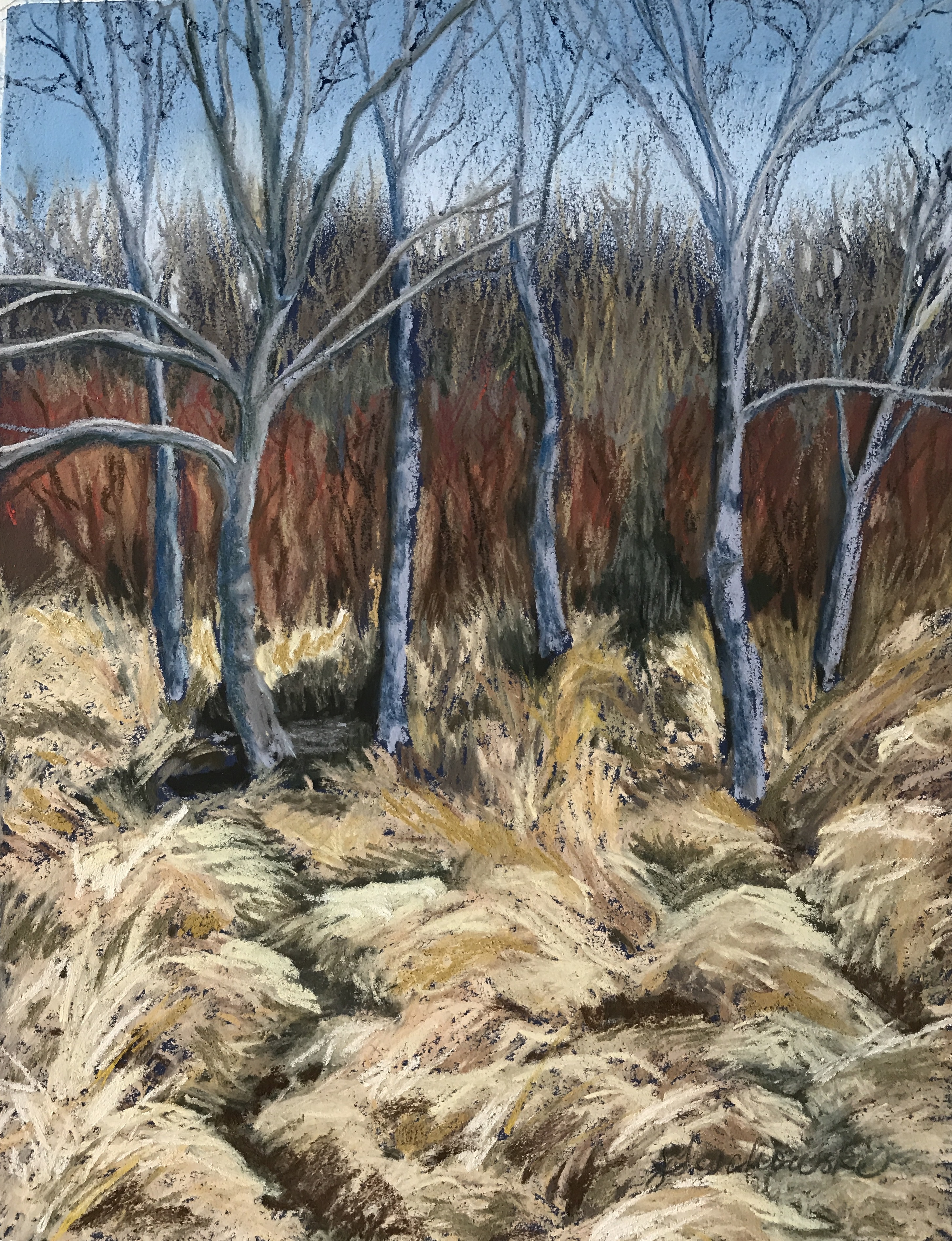 Marsh Awakening is from the front yard of a friend’s home in Sullivan. We did plein air together there one day, after a walk around her property. This line of trees caught my eye-she calls them ‘the sisters’. It was one of those days when we in Wisconsin can feel Spring waking up everything in our environment.

Horicon Spring is a return to the wonderful marsh area. I think this is my favorite season, due to the beginnings of growth, daily changes, and lack of pesky insects. There are so many picturesque sites it can be hard to focus attention down to a single scene to capture. Sometimes, it boils down to more like a ‘feeling’. This feels like Spring to me. 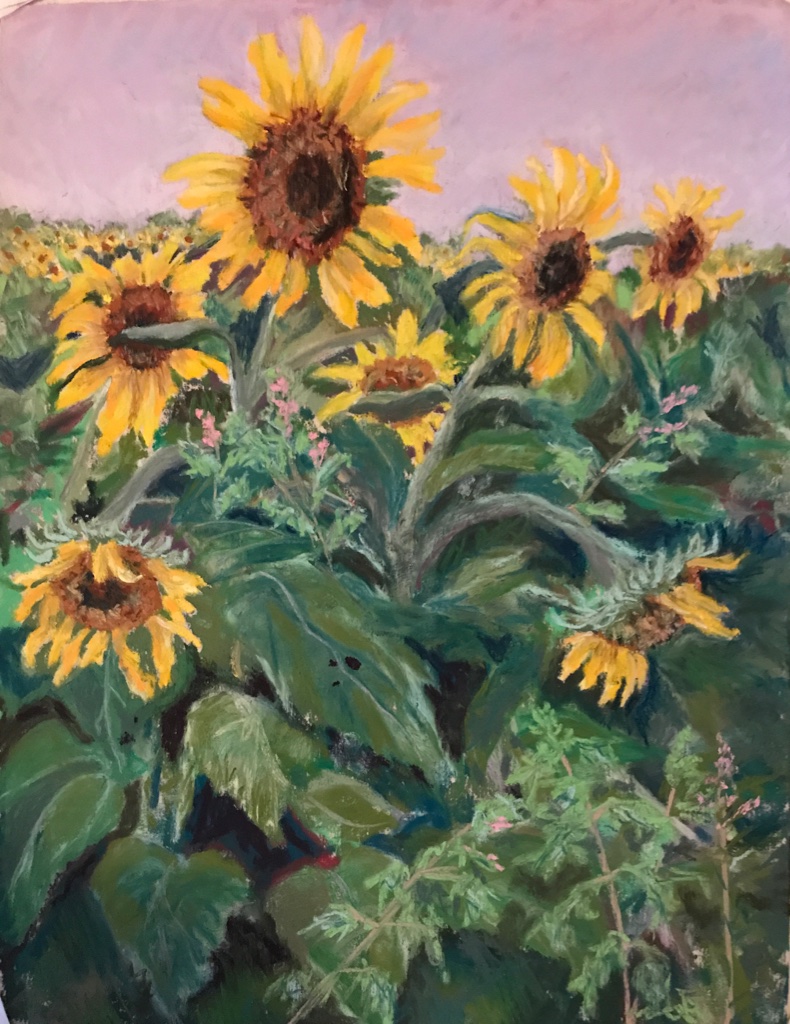 In late Summer, I drove with a painter friend to Pope Conservancy, alerted by another plein air artist who’d alluded to Van Gogh. We arrived to see fields covered with these tall plants, dwarfing most visitors. This led to Season’s End. There was much life present there, as some heads were still reaching for the sun, and others bowing their heads. 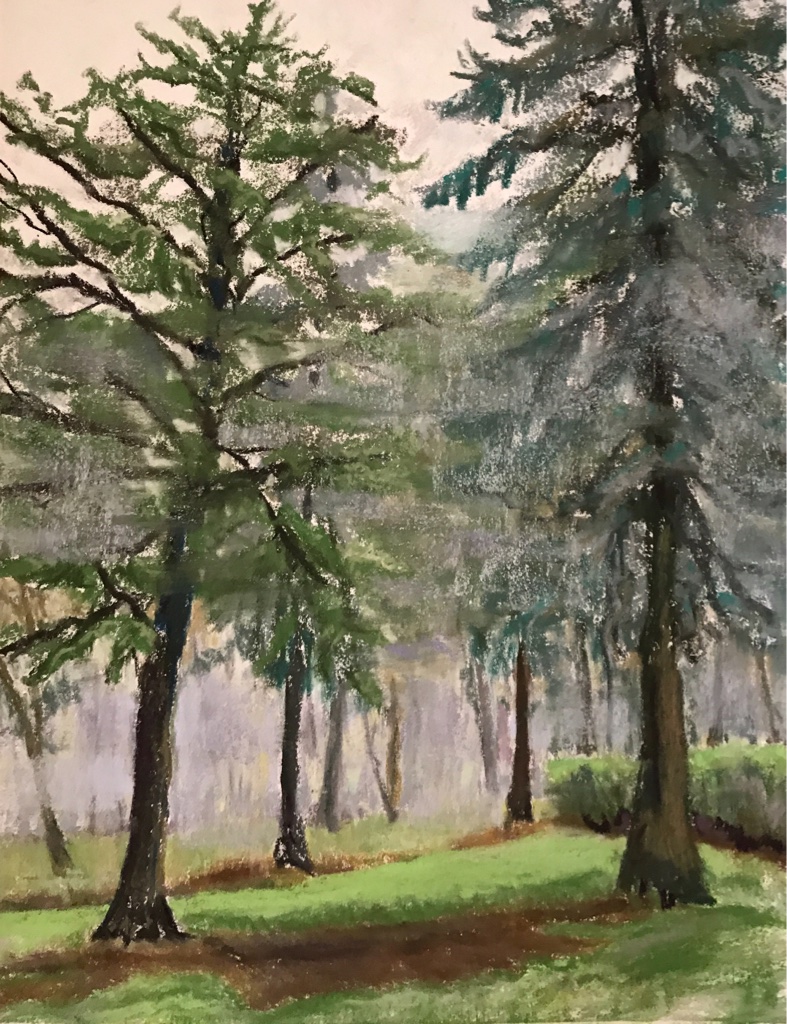 My friend from Sullivan arrived at our home early one morning and we went to Seminary Woods, (south Lake Drive, behind St. Francis Seminary to do plein air “at my house”). Close to the lake, and weather conditions being such, it was a Foggy Morning. If you are familiar with the woods, I am facing east with the cemetery to my right. I lucked out that morning with atmospheric conditions, and enjoy the mood created by fog. 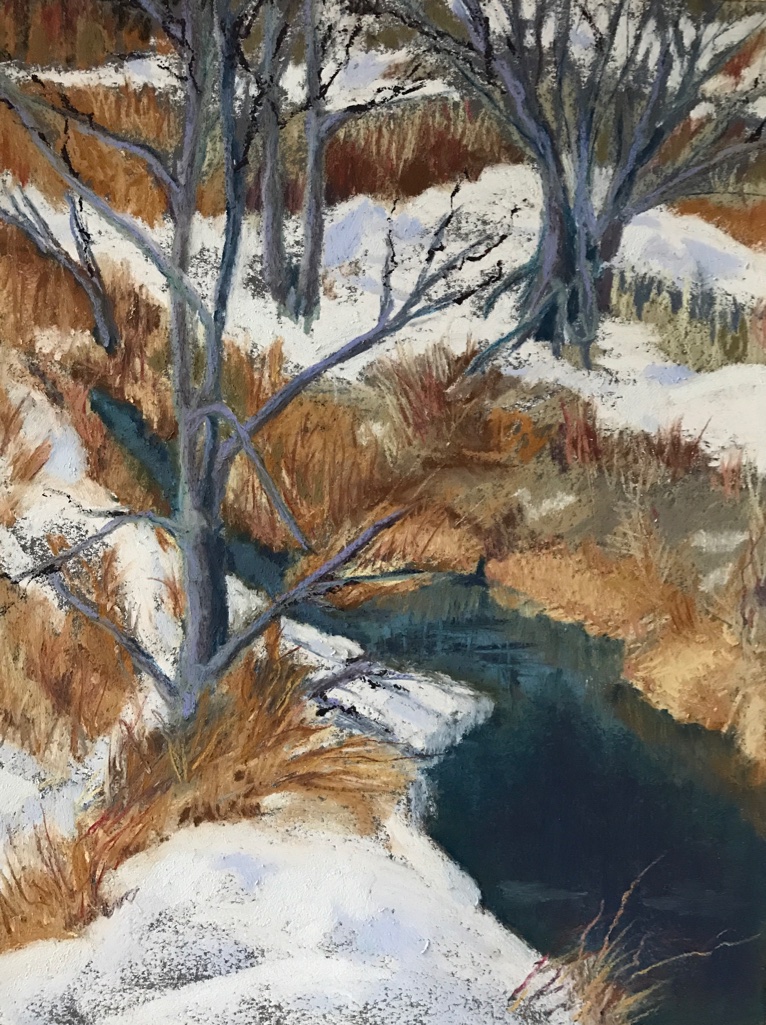 In Winter’s Dance I choose to limit my palette of colors and pursue a slight departure in my style. Not gonna lie-it was a chilly day standing at the side of the road in Mineral Point-and I imbued the image with that shivering energy. 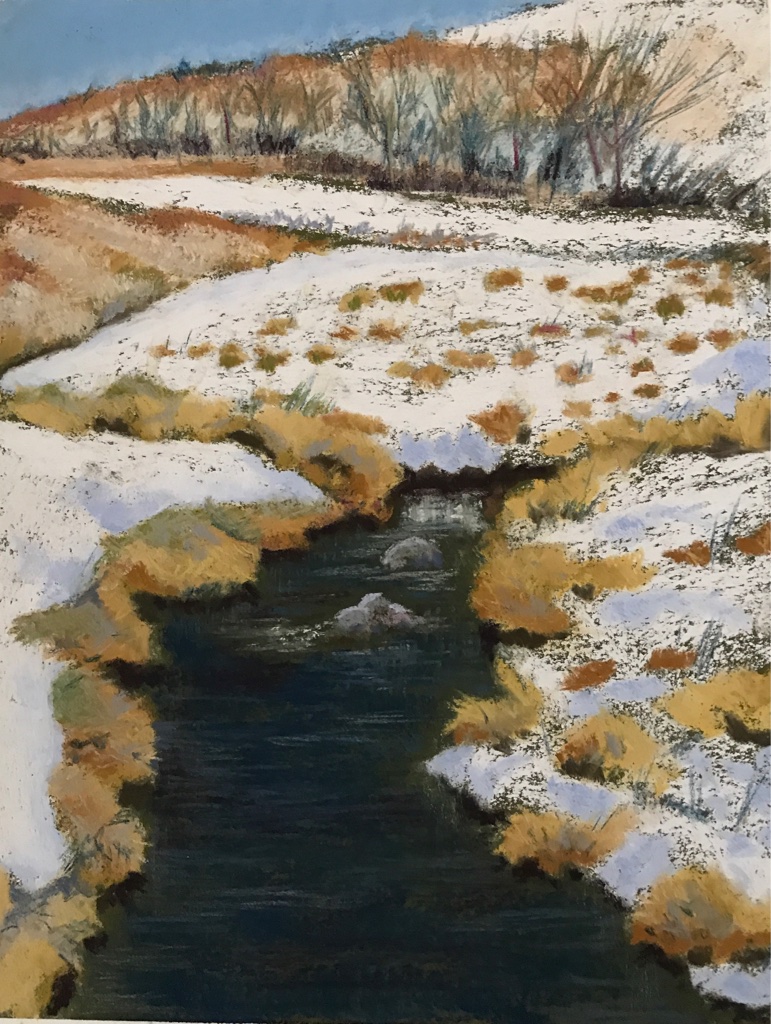 Winter’s Fade was painted the same day, with the same colors used in Winter’s Dance. When I completed Winter’s Dance, I picked up my easel and walked across the road. On this opposite side, the difference between sunlight hitting an open field and woods is visible. It was late March, when cold temps may be around for a while; I’m always looking for Spring though (hence the title).

Dune Path 1 & Dune Path 2 were done, nearly side-by-side at Terry Andrae; as a rule, I’m not a fan of titles with numbers in them (i.e., composition #1, etc.) but any other title seemed inadequate. It was a beautiful sunny morning, I set up and painted both, by just giving my sightline and easel a slight turn.

Dune Path 1 & Dune Path 2 were done, nearly side-by-side at Terry Andrae; as a rule, I’m not a fan of titles with numbers in them (i.e., composition #1, etc.) but any other title seemed inadequate. It was a beautiful sunny morning, I set up and painted both, by just giving my sightline and easel a slight turn.

Setting Sun was painted in Yosemite. There is a mountain in the distance and the sun was beginning to set, when I started. I was drawn to the casting shadows and worked quickly. By the time I was packing up my pastels and easel, the sun had gone down and with it the air temperature! Sudden bone-chilling cold made me happy I’d pulled the plug when I did.

A group of my artists friends gathered in the fall to do plein air at Grant Park in Milwaukee. Autumn Path came together quickly and I have very fond memories of that day, working with those friends. The trees were in various stages of change and it was a pleasant day, temperature wise. Many people were out in the park, walking paths and stopping to see our work. 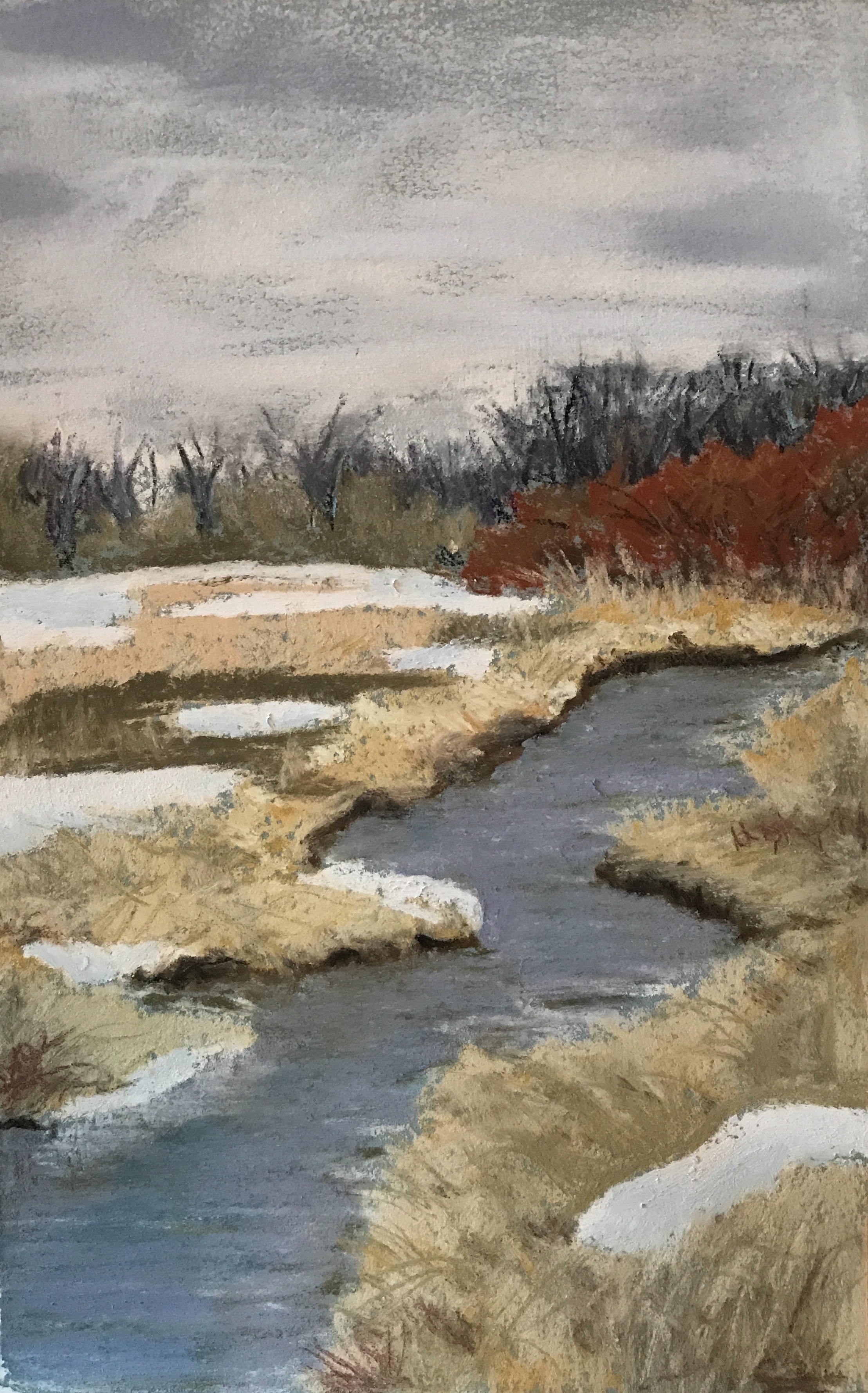 Gray Day, is another plein air done out in the country on a non-snowy day. I think it captures the mood of winter. It’s fun to look for color in the wintertime; it’s there if you look for it! 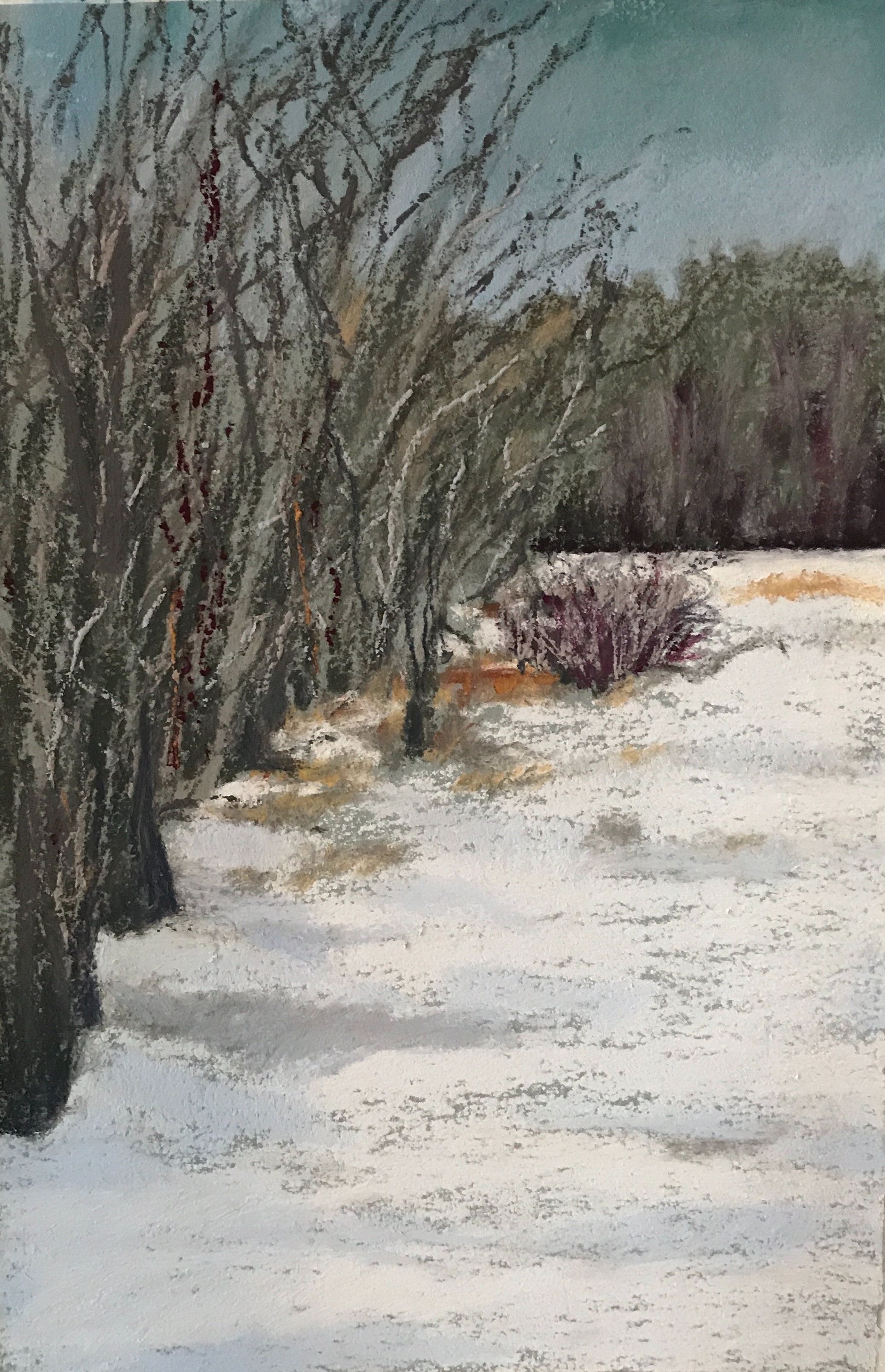 During winter, I always love to see a blue sky, even though it means the temps are colder, without the insulation provided by clouds. Blue Sky captures the joy I find in the sky when the sun is out and it’s cloudless. Makes it even easier to see all those colors of winter. 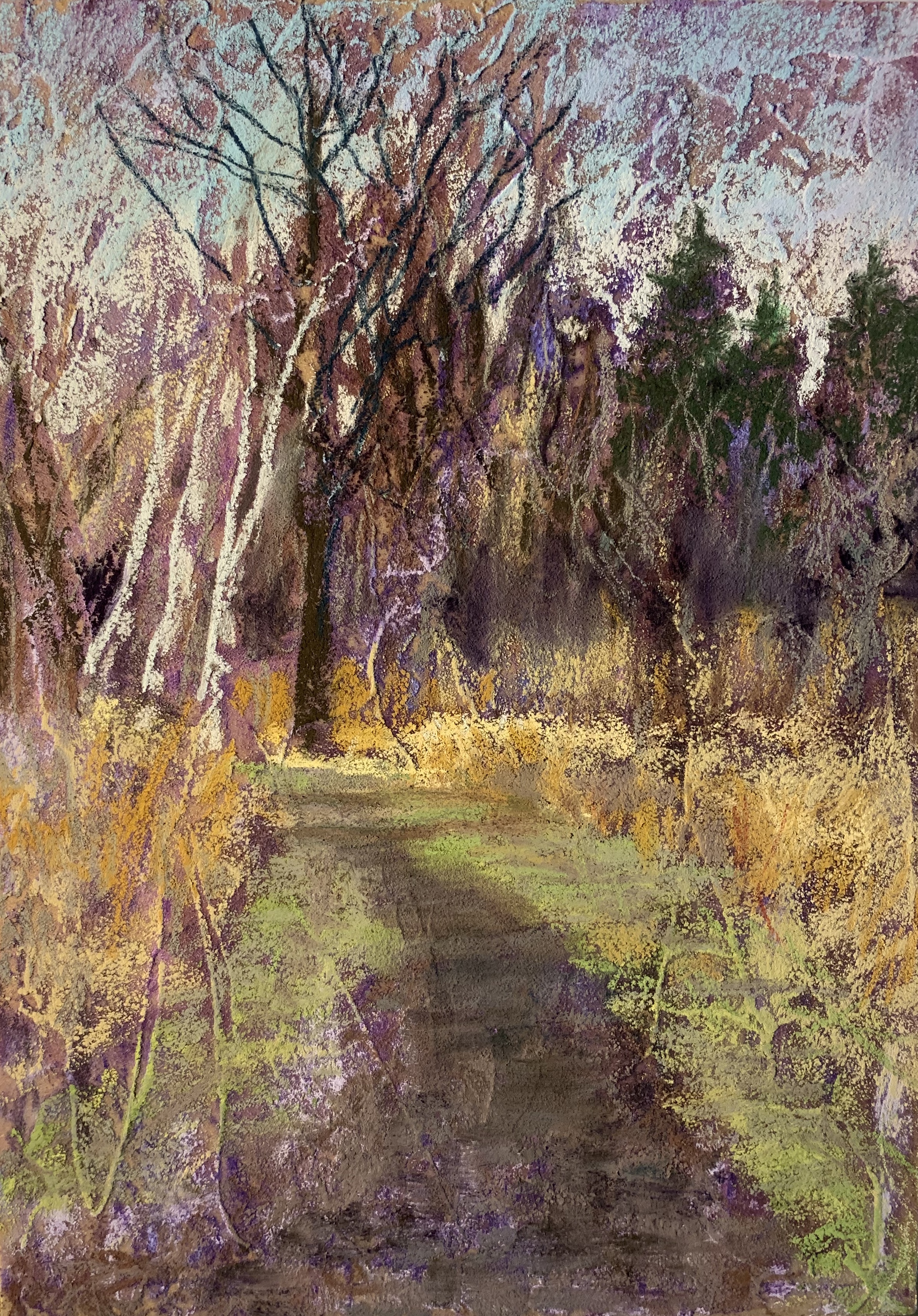 Late Afternoon is from a path near my home and is the result of my trying to streamline what I carry into the field when I am going to paint plein air. I was satisfied with my new system; this painting came together quickly. I was fortunate to catch some of the late afternoon sun hitting the scene, that timing was unplanned. 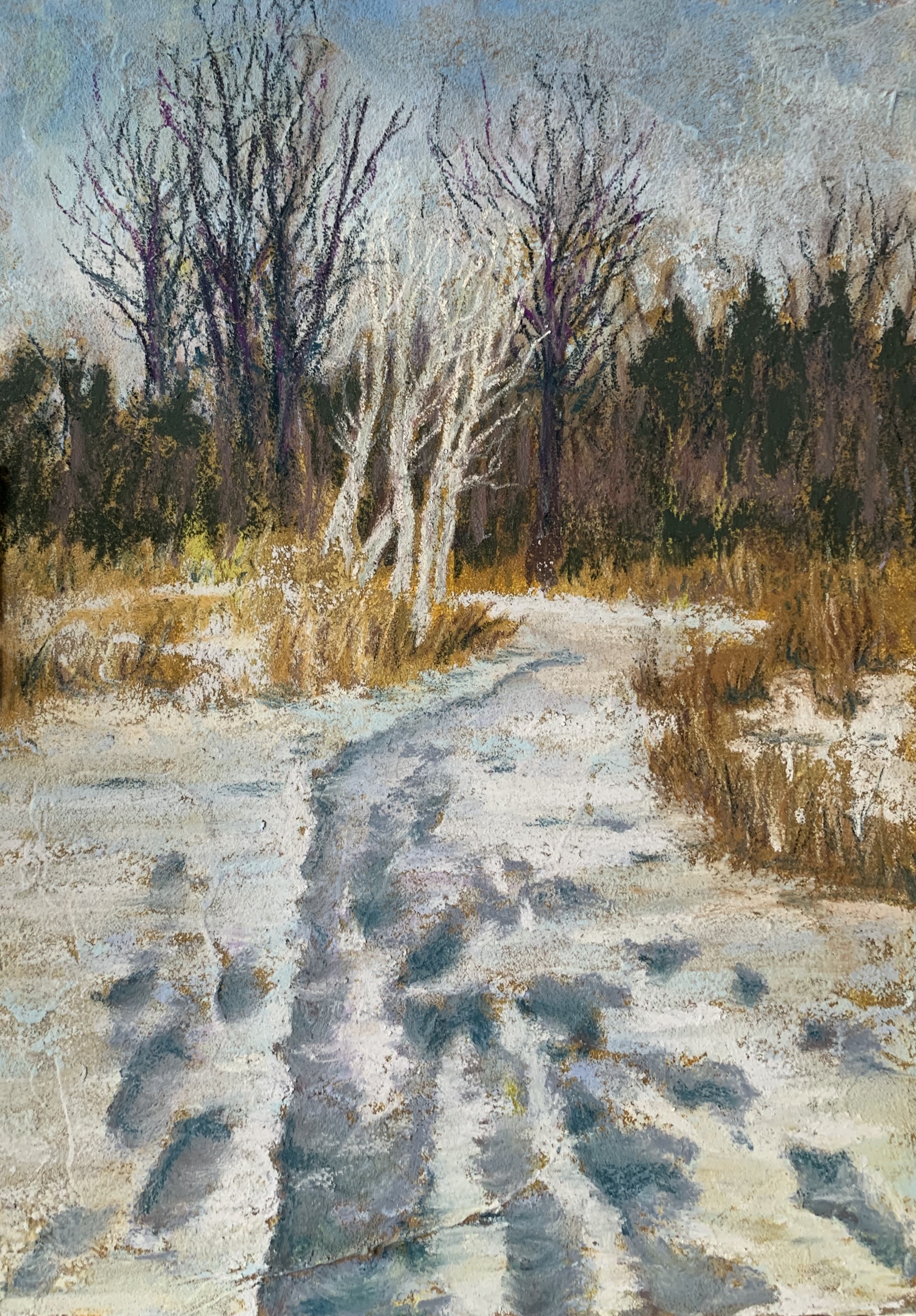 Snowy Tracks is the same path as Late Afternoon, which was painted three weeks earlier. You’ll notice there is a slight change in distance from the trees and it was a bit more challenging to walk on this path to find my earlier spot. Crunchy snow, need I say more? 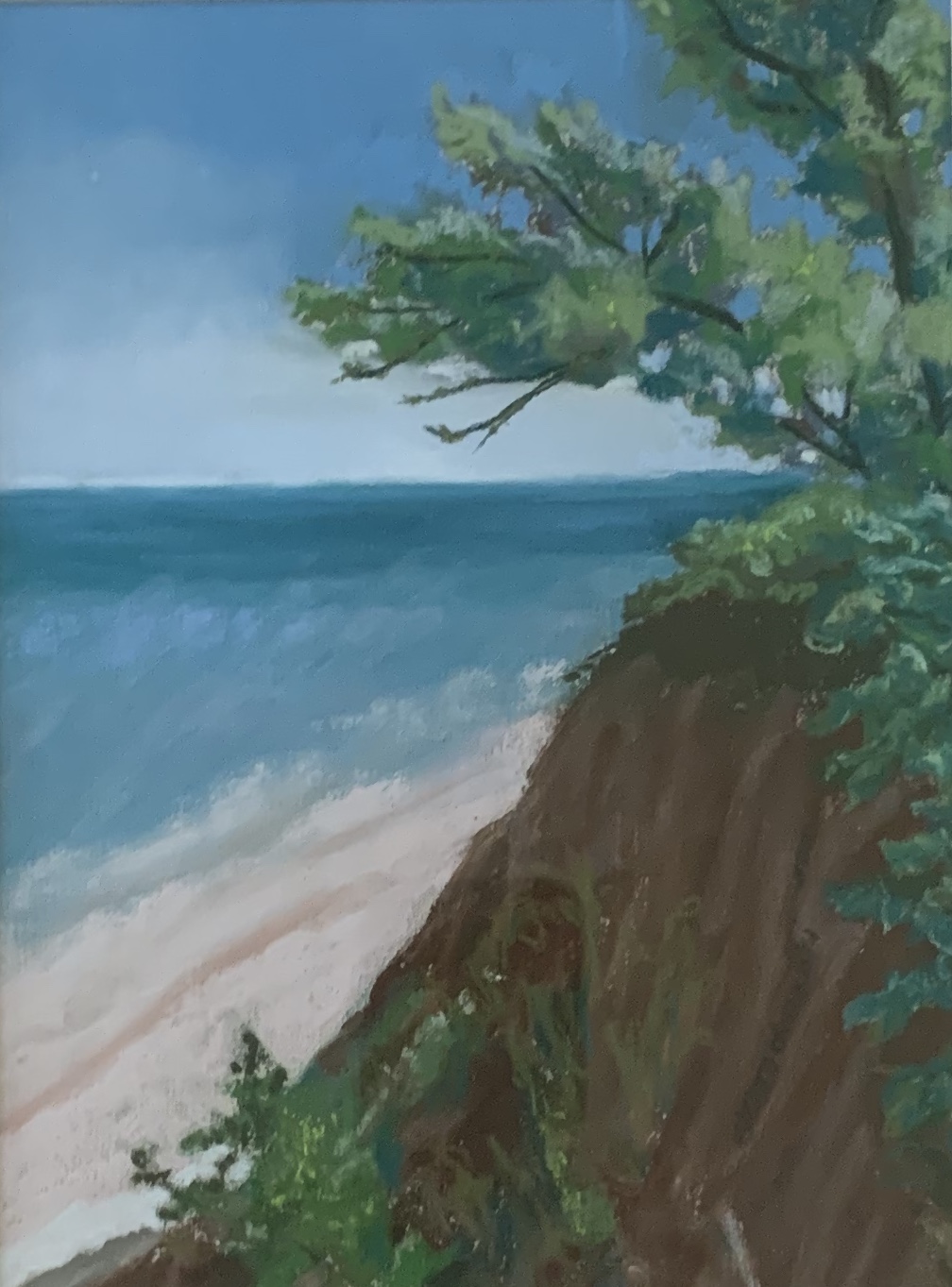 September Breeze was painted at Lion’s Den Gorge, a place I’ve only discovered in the last few years. We are so fortunate that our big lake has remained fairly naturalized for our visual enjoyment. Another image I hope might evoke a sense of time and place, if you’ve stood at the lakefront and taken it all in.