"I never thought I would go to college," says Amos Malone. If, during his difficult childhood in Milwaukee, someone had told him that someday he’d not only go to college but also earn two degrees and establish a scholarship fund for future students—all before the age of 30—he wouldn’t have believed them. But today, the Amos Malone Criminology Fund stands as a testament to his journey—and to the impact that even recent grads can have on the lives of future UW-Whitewater students. 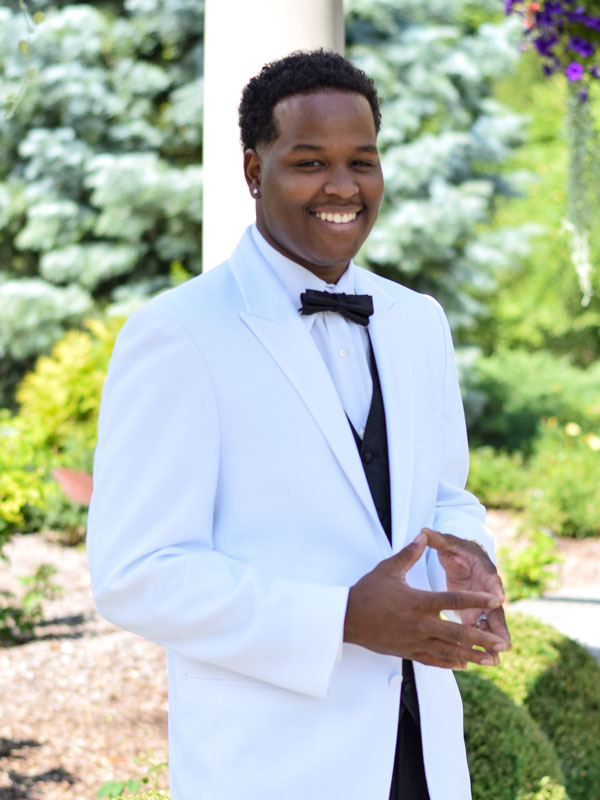 "The way I grew up, it wasn’t the best environment," Malone says. He was kicked out of his high school twice, and he saw his grades plummet from the highest to the lowest in his class, all while enduring a period of homelessness and watching loved ones face incarceration. He was even initially rejected from UW-Whitewater, but, after a little bit of negotiation and a lot of hard work on a grade-improvement plan, Malone officially became a Warhawk in 2010.

With help from the Pathways college preparedness program—for which he later became a program leader—he began his pursuit of a degree in business. As slipping grades put his place in the university’s business school in jeopardy, however, Malone’s job as a security officer at Mayfair Mall serendipitously reawakened his long-held interest in law enforcement.

"I experienced a lot of inequality growing up," he says. "I saw police every day, every day, in my neighborhood back home." Malone’s academic advisor suggested he explore that interest further through a criminology course—and one class was all it took for Malone to declare his new major. "Learning the criminal justice [system] and being able to apply that to what people back home were facing and dealing with, it grew a sense of, 'hey, I should know this,'" Malone says. "I can go help my community and help people that are dealing with these same issues as people I know."

After graduating with his B.S. in criminology in 2015, Malone returned to UW-Whitewater for his MSE in professional development, which he earned in 2017. "I love Whitewater," he says. "I would love to get my Ph.D., or just the experience needed so I could teach here." For now, Malone is putting his current degrees to good use as a probation officer in Elkhorn, where he focuses on reducing recidivism, or the likelihood that parolees will re-enter the system.

While relaxing one evening with his wife (Christina [Hill] Malone B.S.‘17) and their young son, Malone reflected, as he often does, on his affection for the university and for the professors who helped him along the way, including Greg Jeffers, Paul Gregory, Ron Berger, and Marvin Free. "I think about how they wrote recommendation letters for me, talked to me about criminal justice, and even helped me find [internships]. I was like, 'man, I really want to be able to help their students.'" And so he did, first through mentoring three criminology undergrads of color, helping them with class selection, internship searches, and general life advice. Eventually, however, Malone wanted to help even more UW-Whitewater students.

With encouragement from his wife and logistical support from the university’s foundation office, the Amos Malone Criminology Fund handed out its first scholarship prize in 2019 to Jessica Hernandez. "I’m just happy to give it to her. She’s amazing for the field of criminology, and that’s what I wanted," Malone says. "I wanted amazing people that are really passionate about criminal justice." The fund will aid future students who major in criminology, whether they intend to jump straight into the field or pursue masters and Ph.D. programs.

Malone’s investment in future Whitewater students is a tribute to the impact the university has had on his life—and it helps him put his mind at ease, too. "I [believe] tomorrow’s not promised. I’m always worried about the future," he says. "I always want to be able to think about what legacy I would leave. I have a son now; I want to be able to say I left my mark someplace in this world."

For more information on creating a scholarship and other ways to support UW-Whitewater students, please contact foundation@uww.edu.